Trudeau suggests there will be violence against truckers’ protest 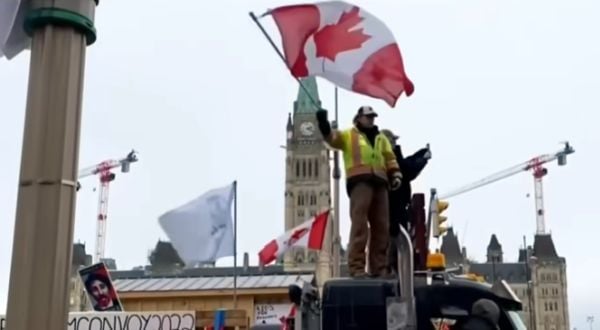 Justin Trudeau, the prime minister in Canada, is threatening truckers protesting the nation’s extreme COVID mandates, with violence, in the form of a “crackdown” he projects will happen as he tries to end the anti-mandate “Freedom Convoy” that has disrupted both Ottawa traffic and the transport of consumer goods in recent weeks.

A Gateway Pundit report charges that he’s said he’s ready to do “whatever it takes” to end the protest that has generated support from hundreds, possibly thousands, of truckers.

He’s been under pressure from his own nation’s politicians but also from Joe Biden to attack the truckers, and issued a statement that, “The prime minister and ministers will continue to work closely with all orders of government and local authorities to respond with whatever it takes to help provinces and municipalities end the blockades and bring the situation under control.”

But he wasn’t the only hint of violence out there.

Fox News reported a CNN analyst, Juliette Kayyem, had the following suggestion to deal with Canadian citizens: “The convoy protest, applauded by right-wing media as a ‘freedom protest,’ is an economic and security issue now. The Ambassador Bridge link constitutes 28% of annual trade movement between US and Canada. Slash the tires, empty gas tanks, arrest the drivers, and move the trucks.”

Protests by the truckers began as part of their opposition to the COVID-19 vaccine mandate, and several provinces have now agreed to roll back some restrictions.

But Kayyem suggested no accommodation, doubling down with: “Trust me, I will not run out of ways to make this hurt: cancel their insurance; suspend their drivers’ licenses; prohibit any future regulatory certification for truckers, etc. Have we learned nothing? These things fester when there are no consequences.”

Her critics pointed out it may be difficult to move trucks out of the way when they are out of fuel, and their tires are slashed.

It was AP that reported Ontario’s premier was at the end of his tolerance and was declaring a state of emergency, including threats to impose “consequences.”

The report said those could include “a year in prison and a maximum fine of $100,000. The orders will also provide additional authority ‘to consider taking away the personal and commercial licenses of anyone who doesn’t comply,’ according to his office.”

Further, strategies were being developed to tow and confiscate trucks, reports said.

The Ambassador Bridge carries more international U.S.-Canadian traffic than any other, about 25% of all trade between the nations, and a political science professor at the University of Toronto, Nelson Wiseman, told AP the American administration was “freaking out.”

Reports on Friday said the protesters agreed to open one lane for traffic at the Ambassador Bridge.

Several other crossings to the U.S. also have been blocked. And sympathetic protests have erupted in several countries, including at several points in the United States where calls are developing for a protest to shut down Washington, D.C. There already have been announced concerns about a possible traffic blockade of the weekend’s Super Bowl football game.

That the protests already have reached a measure of success is evident in the fact that several provinces already are starting to life mask demands and vaccine requirements.

Trudeau, meanwhile, has made the claim that the protesters are a “fringe” group, despite the thousands of trucks involves and the thousands of people who have lined highways in frigid temperatures to support them.

Summit News pointed out Trudeau did, however, come up with a novel reason to submit to mandates and restrictions.

To avoid mandates and restrictions.

He said, “Canadians got vaccinated. I can understand frustrations with mandates but mandates are the way to avoid further restrictions.”

The post Trudeau suggests there will be violence against truckers’ protest appeared first on WND.

Boris Johnson timeline as Prime Minister: From ‘Get Brexit done’ to Partygate