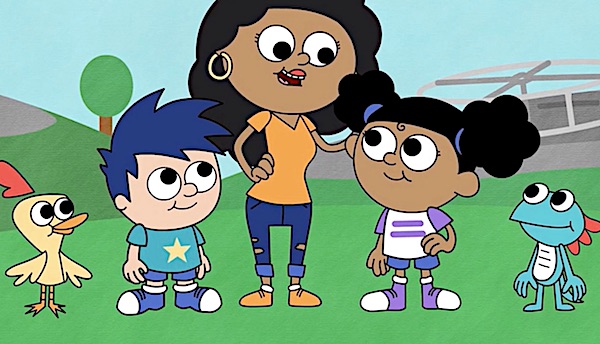 A cartoon featuring discussion about children ‘touching themselves’ is being used in first-grade-classes in a posh New York City private school. (Video screenshot)

A former “equity specialist” at a Texas school district admitted that its schools teach through a Critical Race Theory (CRT) “lens,” according to videos obtained by the Daily Caller News Foundation.

Jonathan Pérez, a former “Equity Specialist” at Fort Worth Independent School District (FWISD) in Fort Worth, Texas, explicitly stated that the school district teaches through a CRT lens during an August 2020 equity training session for teachers, according to a video leaked by a teacher and obtained by the DCNF from Carlos Turcios, an activist who spent four years on FWISD’s Racial Equity Committee and is now an education activist fighting CRT in the district.

“The fact is there are so many … things, policies, practices, procedures, programmings that we have that have been deep … in our system so long that when we really dissect it through a Critical Race Theory lens, is one of the lens that we use, we see how these inequities come up and show up,” Pérez said during the training, according to video footage obtained by the DCNF.

CRT holds that America is fundamentally racist, yet it teaches people to view every social interaction and person in terms of race. Its adherents pursue “antiracism” through the end of merit, objective truth and the adoption of race-based policies.

“Racism shows up on our way to work, on the radio, on the TV shows, again, it shows up in multiple forms,” he said. Peréz added that it reminded him of a tweet he had seen that said “racism is so deeply embedded in our country, that when you protest against it, people think you’re protesting against the United States.”

He said the goal of FWISD’s racial equity team is “to dismantle institutional and systemic racism” in the district “at the community level, school board level, the district level, the campus level and the student level.”

The district holds an annual “Racial Equity Summit,” where speakers and administrators discuss equity initiatives that FWISD is implementing, but Peréz said you “can’t dismantle a 400 year old racist system in one day or two conversations.”

At the December 2021 FWISD Equity Summit, educator and racial equity consultant Altheria Caldera gave a presentation where she said you should “never be embarrassed to be antiracist” and explained it is “totally okay to be woke,” according to a video of the event shared with the DCNF.

“In fact you should be embarrassed not to be [antiracist] … school board members and other elected officials … [if] they are hesitant at any point to say that they are antiracist, they don’t need to be in that position,” she said. “Because, if you are not anti racist, what are you?”

The crowd responded with calls that they would be racist if they didn’t take an “antiracist” position.

Peréz explained that to “make this kind of change it starts at the very top” with school board members.

“Our school board members passed a racial equity policy that allows us … I don’t want to say allows us, but … gives us the opportunity to bring these conversations to the forefront without the fear of getting in trouble or retaliation.”

“Especially for our white brothers and sisters, when we get into these conversations, it gets so hard that they many times either they just don’t want to listen to it or even for our colleagues of color, students of color, like it’s so hard that people would just rather not deal with it,” he added.

He said they have a “working definition of race” and are “reexamining the presence and role of whiteness.”

“Right now I see a lot of beautiful black, brown, white faces and it’s okay to say that, because if I say ‘Oh, I don’t see color’ that’s another form of racism because you don’t see color, you don’t see me,” Peréz said. “I’ve been working with principal administrators, really everybody here, to develop your own personal racial consciousness, but also how that shows up into the classroom into your everyday work,” he added, referring to initiatives at the “campus level.”

Whistleblower in FWISD has sent this video of a Equity session with teachers in a Fort Worth School. Here the Equity Specialist says standardized testing is racism, that CRT is a tool to dismantle systematic racism, and how the ISD is embedding anti-racism.
(Zoom August 2020) pic.twitter.com/CnqbUg18WR

Pérez is now the Program Director of Governance & Leadership at Leadership ISD, according to his LinkedIn. “Leadership ISD’s mission is to equip civic leaders to advocate for educational equity and excellence for all students,” according to its LinkedIn page.
“We believe the path to this transformation lies at the intersection of racial justice and educational excellence so we will continue to work beside our communities to advance anti-racist practices and policies that dismantle barriers in front of our children,” the Leadership ISD website says.
Another teacher training in the district infused the tenets of CRT claiming “America is oppressive” and “White supremacy is everywhere,” the DCNF previously reported.
FWISD advertised a class for teachers and staff that introduced CRT into the curriculum, according to a September 2020 “Overview of Service Provided by the Division of Equity & Excellence.” The overview outlines a “Critical Race Theory (CRT) in Fort Worth ISD: An Introduction,” course, which Pérez said he facilitated, according to video obtained by the DCNF.
“An Introduction to Critical Race Theory is also an important feature here in Forth Worth ISD,” Superintendent Dr. Kent Paredes Scribner said in another video obtained by the DCNF. “We believe [it] will help us achieve those academic goals, differentiated approach, not only to instruction, but also building relationships, restorative practices, working to help young people and adults alike navigate through difficult moments and really looking at microaggressions, implicit bias.”
FWISD advisers and faculty members should be “prepared to host racial affinity spaces as needed,” which involves segregating participants by skin color, according to the district’s overview. Advisers should also “be able to practice culturally responsive teaching” and “have an internalized understanding of critical race theory,” according to the September 2020 overview.
“I think it’s problematic that Fort Worth ISD has over 2.1 million dollars spent on the Racial Equity Department to only create controversy,” Turcios told the DCNF. “Why is our taxpayer’s money spent on ideology and divisive rhetoric that will not help our schools? Superintendent Scribner should resign for fostering this type of environment.”

Equity consultants Dr. Sharla Horton-Williams and Dr. Toni Harrison-Kelly from School Leadership for Social Justice spoke at the 2021 FWISD Equity Summit, where they told attendees to look at their school’s culture practices and policies for “whiteness.”

“Own it, see it, find your place in and use your power, your influence and your privilege to affect the outcomes for black and brown students,” she added. “What do we mean by the term whiteness? We mean it’s a set of norms, behaviors, practices, beliefs and values that privilege some by oppressing others.”

Horton-Williams defined privilege as having access, advantages and acceptance, which she said “happens generally based on race.”

“What we’re really saying is think about your school, your school environment, your classroom, your districts, your larger educational system, who has privileged and who’s being oppressed?” she concluded.

At a Nov. 9 school board meeting, a pro-CRT parent, Malikk Austin, told attendees that he had 1,000 soldiers “locked and loaded” for those who “dare” question the need for race-based curricula, such as CRT.

A co-chair of the FWISD racial equity committee, Norma Garcia-Lopez, resigned in December after admitting she had doxxed parents who opposed her policies and left a parent a profane voicemail.

“F— you, you stupid b—-. F— you with your White privilege, not caring about the well-being of others, f— you,” Garcia-Lopez said in the voicemail.

Garcia-Lopez shared the personal information of FWISD parents and encouraged community members to call parents out for opposing mask mandates while she served on the committee.

Editor’s note: This article has been updated to reflect that Dr. Sharla Horton-Williams and Dr. Toni Harrison-Kelly’s presentation occurred at the 2021 FWISD Equity Summit.

WAYNE ROOT: The Supreme Court Just Made a Disastrous Ruling. Now We Need Donald J. Trump More Than Ever as President. But First He Must Become House Speaker. Here’s Why.

They’re Not Laughing Now: Wood-burning Stoves and Firewood in Short Supply in Germany as Citizens Fear Freezing to Death Due to Gas Shortages

WAYNE ROOT: The Supreme Court Just Made a Disastrous Ruling. Now We Need Donald J. Trump More Than Ever as President. But First He Must Become House Speaker. Here’s Why.

They’re Not Laughing Now: Wood-burning Stoves and Firewood in Short Supply in Germany as Citizens Fear Freezing to Death Due to Gas Shortages