After its data indicated vaccinated people were more vulnerable to COVID-19 infection than the unvaccinated, Scotland’s national health system announced it would stop publishing its weekly chart of COVID-19 hospitalizations and deaths by vaccine status.

Public Health Scotland said the data has been “inappropriately misinterpreted” by “anti-vaxxers” without adequate context, the Herald newspaper of Scotland reported.

PHS said it will concentrate instead on “more robust and complex vaccine effectiveness data.”

An epidemiologist who was an adviser to the Trump administration, Dr. Paul Alexander, cited the Scottish data in testimony during a panel last month hosted by Sen. Ron Johnson, R-Wis. Alexander said the data “demonstrates conclusively that the vaccine is driving massive infections in the vaccinated.”

The Canadian health researcher cited a table published by PHS showing that by the week beginning Jan. 22, the age-standardized COVID case rate per 100,000 in Scotland was 381.5 among the unvaccinated compared to 570 in the double-vaccinated and 447 per 100,000 in the boosted.

The Herald noted that similar patterns have been observed in England and the Canadian province Ontario.

PHS now will publish the data quarterly rather than once a week. And it will focus on vaccine efficacy against infection based on trials and real-world studies.

The Herald noted that Scottish officials acknowledge that the move will fuel claims among vaccines skeptics of a “cover-up.”

A spokesman for PHS said the “main important point around all of the analysis is we understand whether the vaccines are working against catching it and against getting severe COVID, and that’s where the vaccine effectiveness studies come in, which are a completely different methodology.”

“The case rates, hospitalisation rates, the death rates are very simple statistics, whereas for the vaccine effectiveness studies we use modelling, we compare people who have tested negative to those who have tested positive and match them on their underlining co-morbidities,” the spokesman said.

He said people “are looking at those simple data and trying to make inferences about the vaccination, whether the vaccines work, inappropriately and sometimes willfully.”

“There are so many caveats, and they just pull certain figures out that should not be used,” the spokesman said.

“What we are going to do is do a lot more on the vaccine effectiveness side and try and make people understand how effective the vaccine is.

Dr. Aaron Kheriaty, who was fired by the University of California for refusing to get vaccinated, cited data from highly vaccinated Ontario, Canada, that was similar to the Scottish data, The Herald noted, showing a higher infection case rate among the vaccinated than the unvaccinated.

“Obviously, there can be confounding factors, but those factors actually cut both ways,” he wrote for The Blaze. “However, at the end of the day, these are age-stratified adjusted case rates per 100,000 and are completely fair game to use. No vaccine that is anywhere near as effective as they make it out to be should be netting these results.”

Horowitz pointed to the latest chart, showing a lower rate of infection among the unvaccinated: 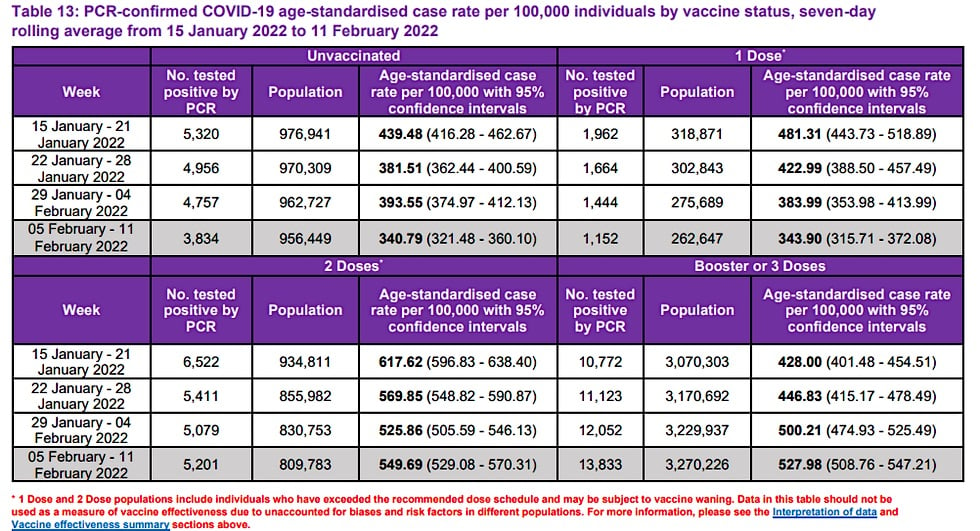 He noted that for the past two weeks, PHS has been placing disclaimers at the bottom of the charts.

“What the chart clearly shows is what we have been seeing throughout the world — from the U.K., Canada, and Israel, for example — namely, that the second shot has gone negative a long time ago and the third shot is gradually following in the same direction,” he wrote. “The public health officials themselves are demanding that people get boosters because they say the other shots wane. Well, logic would dictate that now that we are three to five months into the boosters in most places, they are waning as well. We also know that waning efficacy is potentially associated with a Trojan horse effect of antibody dependent disease enhancement, something the FDA admitted was never studied in the long run (at the time they thought the shots wouldn’t wane) but would be a risk ‘potentially associated with waning immunity.'”

Horowitz addressed the Scottish government’s argument that the figures are skewed because the vaccinated test more often than the unvaccinated.

He pointed to data from the Canadian province Alberta, which also has been removed since researchers and reporters like Horowitz began citing it, that about 40% of cases, 47.6% of hospitalizations and 56% of deaths among the vaccinated occurred within 14 days of vaccination.