How the Javelin is wrecking Putin’s army 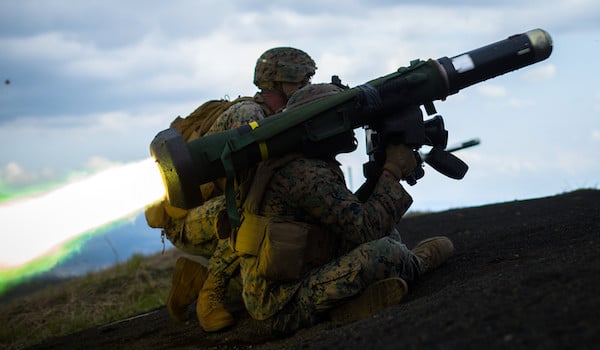 Ukraine is a highly devout country – about 87% of its 41 million citizens practice Christianity. So it’s notable that, to many Ukrainians, Mary Magdalene now has a new moniker: St. Javelin.

The viral meme recasting the “Apostle of the apostles” is in reverence to a device that knows no religion: the FGM-148 Javelin portable fire-and-forget anti-tank missile. Since the start of Putin’s dastardly invasion of Ukraine, Ukrainian freedom fighters have extensively utilized the American-made weapon system – co-produced by Lockheed Martin and Raytheon – to rain destruction down upon the Russian military’s armored vehicles. Ukraine’s Defense Ministry estimates that 102 tanks and 536 armored vehicles had been destroyed as of February 26th. The Javelin likely factored heavily into that rousing combat success.

“This weapon allows a single soldier to target and destroy even the most heavily armored main battle tank with an almost guaranteed kill rate, at great range and with minimal risk,” Army Capt. Vincent Delany wrote of the Javelin for West Point’s Modern War Institute.

So how does this ‘holy’ piece of military machinery work? Laypersons might be envisioning a bazooka-like operation, but anti-tank weapons have evolved considerably since that quintessential rocket launcher was deployed in World War II. With the Javelin, a soldier using the portable, reusable Command Launch Unit (CLU) looks through an infrared sight to locate a target up to an incredible 2.5 miles away. When the user spots a target, he operates a cursor to set a square around it, almost like cropping an image. This is then sent to the onboard guidance computer on the missile itself, which has a sophisticated algorithmic tracking system coupled with an infrared imaging device. When the missile locks on to the target, the operator can launch the self-guided weapon and quickly relocate or reload to fire another missile at a different target.

The Javelin originally debuted in 1996, bearing a couple remarkable innovations. For one, it offers a “soft launch.” David Qi Zhang of the Rensselaer Polytechnic Institute explained what that means in his Master of Engineering thesis on the Javelin.

“The first motor… produces enough thrust to launch the missile out of the tube and a safe distance away, but is completely burned before the nozzle left the tube, leaving no exhaust to hit the operator. The flight motor then ignites to propel the [missile] along its attack path,” he wrote.

A second innovation of the Javelin is that it strikes from above. The missile rises high into the air, up to 490 feet, then blasts down on its target from a steep angle, striking the top of an armored vehicle or tank, where the armor is typically weakest.

Russian tanks are not helpless against the Javelin. Most are equipped with explosive reactive armor. When struck by a penetrating weapon like a missile, the armor detonates, blasting a metal plate outwards to damage the missile’s penetrator and prevent it from piercing the tank’s main armor. The Javelin overcomes this by having tandem warheads, one to deal with the reactive armor plate, and the second to impact the tank’s armor itself. Modern Russian tanks are also equipped with a radar system called Arena, which detects incoming missiles and automatically fires a wide burst of projectiles to destroy or redirect them. But here, again, the Javelin reigns supreme, Delany says.

“The Javelin can defeat Arena while in top-attack mode, due to the missile descending from too steep an angle for the system to engage properly,” he wrote.

Ukraine had been shipped roughly 77 launchers and 740 missiles before Putin invaded. Many, many more of each are now on the way courtesy of the U.S. and European allies. May the Ukrainians put them to good use. Slava Ukraini!

The post How the Javelin is wrecking Putin’s army appeared first on WND.