See shocking decline of ‘queen city of the Northwest’ 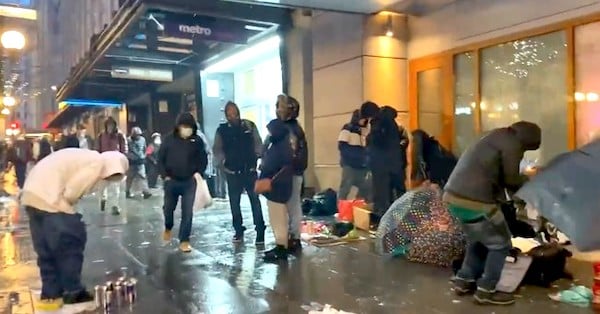 It’s known as the “queen city of the Northwest” and the “emerald city,” but Seattle’s decline into lawlessness and squalor amid a homelessness crisis and the more recent efforts to defund police and soften the punishment for crime is evident even to visitors in the city’s downtown shopping district.

On 3rd Avenue, only three blocks from the Seattle’s iconic Pike Place Market, videos from KOMO News reporter Jonathan Choe reveal the squalid conditions, with homeless people openly using drugs and trash covering the street, Townhall reported, in front of storefronts still covered by plywood some 18 months after the 2020 riots and the takeover of a city neighborhood.

HAPPENING NOW: Just hours after a shooting on 3rd Ave in Downtown Seattle, the insanity has returned. This is the stretch between Pike/Pine St. Open air drug use, sales of all kinds of merch, trash everywhere. How is this allowed?@MayorofSeattle @downtownseattle @SeattlePD pic.twitter.com/UQPmg9krhU

“No wonder businesses are leaving.”

ACROSS THE STREET: For those who do not believe the madness of what’s being allowed on 3rd Ave in Downtown Seattle, this is another vantage point. Hundreds of people just taking over store fronts. No wonder businesses are leaving. Cray cray. #ForReal #Woke #TooWoke pic.twitter.com/jSnoFOw9Vk

STREET INSIGHT: So a lot of this activity on 3rd Ave is happening outside the Century Square office tower, home to corporate biz and storefront shops like Piroshky Piroshky and Chipotle. Listen to what private security guard says about what he sees on the regular. #Seattle pic.twitter.com/7x865oQiFV

Too dangerous for sheriff’s office
In August, as WND reported, the sheriff of King County told employees to work from home because it was too dangerous to come to sheriff’s headquarters in downtown Seattle.

Seattle is known for being at the forefront of the move to defund police as well as for its inability to curb its homelessness problem. The offices are near a homeless camp in City Hall Park, which had been the scene of violent attacks in recent months, including the sexual assault of a court employee by a homeless man in a women’s bathroom.

At the time, more than 200 Seattle police officers had left the department since the 2020 Black Lives Matter protests. The BLM movement and the CHOP protest led to the City Council voting to cut salaries and jobs for as many as 100 officers. The city’s first black police chief, Carmen Best, was among the officers who resigned.

More than six years ago, Seattle declared homelessness an emergency. But as Newsweek reported last summer, Seattle “remains mired in a humanitarian crisis, with tent encampments and open air drug use a feature of many neighborhoods.”

In the summer of 2019, Fox News conducted an investigation “to chronicle the toll progressive policies have had” on the homeless crisis in Seattle, San Francisco, Los Angeles and Portland.

“In each city, we saw a lack of safety, sanitation and civility,” Fox News said. “Residents, the homeless and advocates say they’ve lost faith in their elected officials’ ability to solve the issue. Most of the cities have thrown hundreds of millions of dollars at the problem only to watch it get worse.”

San Francisco, which has more billionaires per capita than anywhere else in the world, has a homeless problem “so severe that it rivals some third-world nations.”

“On any given day you can see souped-up Lamborghinis and blinged-out trophy wives in one part of the city, then walk over a few blocks and see piles of human feces, puddles of urine and vomit caked on the sidewalks,” Fox News said. “The misery of homelessness, mental illness and drug addiction hits deep in San Francisco and has turned parts of a beautiful city into a public toilet.”

‘Seattle is Dying’
In 2019, the local ABC television affiliate KOMO aired a news special on the homelessness problem, titled “Seattle is Dying,” which prompted a national conversation.

Seattle radio host John Carlson, who is on the board of a number of non-profits that help the homeless, said at the time that in his more than half a century in the city, he didn’t “recall a television news special provoking such an ongoing, sustained conversation as this one.”

Far more people have seen it online than saw it on television.

Carlson said the reason “Seattle is Dying” angers “critics anchored to the status quo is that it confirms what many people who live and work here see and believe.”

“It swats down silly talking points about homeless encampments being the result of greedy landlords, Amazon employees or” in the words of one critic, “our regressive tax system, generations of racial discrimination and long-term cuts in public housing.”

“Please,” Carlson wrote. “The problem is that Seattle’s political establishment and a constellation of activists and service providers have created a system that incubates drug abuse, refuses to enforce relevant laws against it or the quality of life crimes associated with it, and then are somehow surprised when the problem of drug-related homelessness swells instead of shrinks.”

Carlson noted that “Seattle is Dying,” by KOMO reporter Eric Johnson, finds one solution in Rhode Island’s Medication Assisted Treatment program for the incarcerated. The state screens every individual who enters the correctional system for opioid use disorder. It then offers, along with drug counseling, all three types of FDA-approved drugs to treat addiction.

The post See shocking decline of ‘queen city of the Northwest’ appeared first on WND.

Collapse Won’t Just Reset Society, It Will Destroy It