WATCH: Putin gets told to ‘kill himself’ like Hitler by Ukraine’s U.N. ambassador 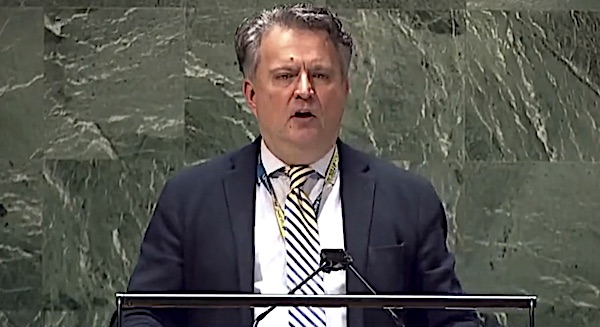 Ukraine’s ambassador to the U.N., Sergiy Kyslytsya, recommended that Russian President Vladimir Putin kill himself like Adolf Hitler, during a discussion on Russia putting their nuclear forces on high alert, HuffPost reported.

Kyslytsya said Putin’s escalation was essentially a death wish and “if [Putin] wants to kill himself, he doesn’t need to use nuclear arsenal,” during an emergency session on Monday, HuffPost reported.

“If [Putin] wants to kill himself, he doesn’t need to use nuclear arsenal. He has to do what the guy in Berlin did in a bunker in May 1945.”

On Thursday, as Russia began its invasion, Kyslytsya told his Russian U.N. counterpart “there is no purgatory for war criminals” and that they “go straight to hell.” At the time, he asked his counterpart to get on the phone and call the Russian leadership to stop the invasion.

Putin announced he was ordering his nuclear forces on high alert on Sunday in response to the West’s economic sanctions levied against Russia due to its invasion of Ukraine. Putin has previously mobilized large-scale nuclear exercises, reminding Russians their country is “one of the most powerful nuclear nations.”

“Putin is continuing to escalate this war in a manner that is totally unacceptable,” the U.S.’ ambassador to the U.N., Linda Thomas-Greenfield, told CBS’ “Face The Nation” on Sunday. “And we have to continue to condemn his actions in the strongest possible way.”

President Joe Biden was asked on Monday whether the U.S. should be worried about a nuclear war with Russia, to which he bluntly said it should not, Yahoo News reported.

The post WATCH: Putin gets told to ‘kill himself’ like Hitler by Ukraine’s U.N. ambassador appeared first on WND.