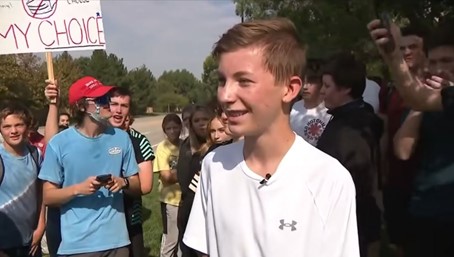 These kids are alright. Thinking for themselves and defying absurd and harmful rules, students across America have been challenging school mask mandates. They have protested, walked out, or just refused to comply — daring to leave their faces uncovered on school property.

In many instances, the students’ defiance of school mask mandates has been met with harsh repercussions. Resisting and speaking out against bullies often does have that result. But, resistance and defiance are also key to putting an end to abuse.

The students who push back on school-sanctioned abuse deserve our support as much as they need it. Those kids — who think for themselves, trust their parents more than the state, and aren’t cowed out of their principles by authoritarian intimidation tactics — are the ones I want running the country one day.