Truckers aiming to arrive in Washington on Saturday 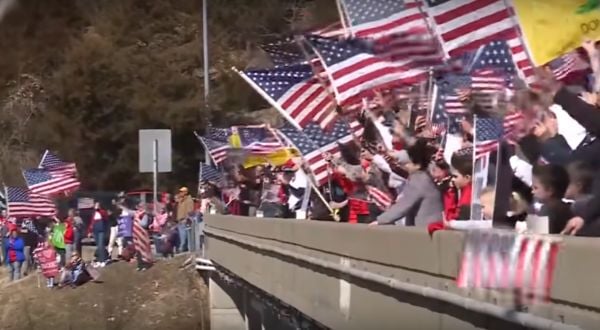 The People’s Convoy, a miles-long string of trucks and other vehicles that left California last week and is expecting to arrive in Washington, D.C., Saturday – meeting up with other truckers from other parts of the country – wants Joe Biden to end those COVID mandates and his self-proclaimed national “emergency.”

Truckers were traveling on Thursday through Ohio and their convoy was described as more than eight miles long.

Kris Young, who runs a Facebook page about the campaign, said, “The rally in Monrovia was a huge success! The layover allowed for others from across the country to join us! We are bigger now than when we arrived.”

The estimate for attendance at the rally in Indiana, called the Shifting Gears Rally, was estimated in the thousands.

Brian Brase, an organizer of the events, said, “It’s time for truckers around the world to stand up for your rights now!”

The activism has been modeled after the Freedom Convoy in Canada that started on its West Coast and traveled to Ottawa, where truckers closed down streets in civil disobedience that prompted Prime Minister Justin Trudeau to declare martial law and use violence against the peaceful protesters who were arrested by the hundreds.

The government also confiscated trucks when it chose.

The Daily Mail reported on the American movement: “The People’s Convoy – which has raised more than $1.5million in donations made through its own website – embarked from California last week on an 11-day trek to Washington D.C. The group plans to hold a peaceful protest near the capital city on Saturday and has sworn not to disrupt roads or bridges like their Canadian counterparts did. Organizers have promised a ‘100% safe, lawful and peaceful journey’ that will ‘terminate in the vicinity of the D.C. area, but will NOT be going into D.C. proper.'”

The report said at least 25 other convoys reportedly were en route to Washington from other parts of the nation. Some of those have been small, some larger, and it remains unclear how many will congregate on Saturday.

The size has been fluid because of the distance of the convoy’s trip, and the expense of the travel, with fuel approaching $4 a gallon because of several factors, including Biden’s insistence on shutting down fossil fuels industry components and pursuing wind power.

One of the other groups was called the Southeast American Freedom Convoy.

Federal officials in Washington had put law enforcement on high alert, and have arranged for the presence of hundreds of National Guard troops to confront the peaceful truckers.

And officials have rebuilt a security fence around the U.S. Capitol.

The convoy, no matter its ultimate number of participants, already has seen significant success as many states and even federal officials have been dropping COVID mandates right and left in recent days.

While the truckers’ message undoubtedly was heard, it’s also fact that Democrats who had imposed those restrictions on Americans’ constitutional rights now are gearing up for re-election campaigns for the 2022 midterms.

In Canada, reports from the Associated Press reveal citizens have lost faith in their government following its crackdown on rights, and Trudeau’s image has been hurt by the handling of the protests.

“Approval among Canadians about the Trudeau-led Liberal Party is near a 12-month low as of last week, according to polling from Ottawa-based Nanos Research. A separate Nanos poll, gathered after Mr. Trudeau cleared a nearly monthlong trucker-led demonstration that had choked the capital, indicates almost half of Canadians say their impressions of the prime minister had worsened during the protest, which called for the end of Covid-19 restrictions,” that report said.

“The prime minister has recently drawn criticism from many Canadians, and even members of his own Liberal caucus, for what they say were polarizing and dismissive comments toward those who disagree with his tough public-health measures during the Covid-19 pandemic,” it said.

John Wright of Maru Public Opinion said Trudeau now faces a divided nation, with evidence in surveys of a “sharp anger” he hasn’t seen in many years.

Trudeau had derogatorily labeled the thousands of truckers involved in the protest there a “fringe” group. And he said their views on freedom were “unacceptable.” In the U.S., those who have opposed COVID mandates have been labeled domestic terrorists and threatened by government officials.

The post Truckers aiming to arrive in Washington on Saturday appeared first on WND.