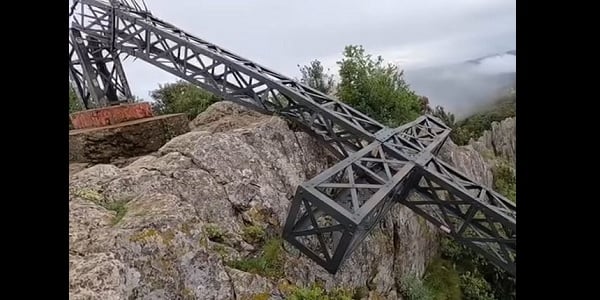 A column at the Gatestone Institute by Raymond Ibrahim, a distinguished senior fellow at Gatestone and a Shillman Fellow at the David Horowitz Freedom Center, is decrying the 2,300 Christian churches that have been vandalized in Greece.

The details, Ibrahim confirms, come from the nation’s Ministry of Education and Religious Affairs, which notated 2,339 incidents of church desecrations in Greece between 2015 and 2020.

That’s during a time when Greece was being flooded with “migrants from the Islamic world,” he reported.

According to the Greek City Times, “There appears to be a correlation between the increase in illegal migration and the incidents of attacks on Greek Orthodox religious churches and religious spaces during the five year period which occurred during the peak of the migration crisis.”

In 2020 alone, there were “385 incidents against Christian churches and buildings, including ‘vandalism, burglary, theft, sacrilege, necromancy, robbery, placement of explosive devices and other desecrations,'” the report said.

While few incidents have made the headlines in English-language reporting, one egregious case came last year when “Muslim migrants entered into and utterly desecrated a small church. Proud of their handiwork, they videotaped portions of the incident and uploaded it on TikTok. It shows a topless migrant dancing to rap music as he walks towards and inside the church. The next clip shows the aftermath: devastation inside the church, with smashed icons and the altar overthrown.”

The year before, “Muslim migrants ransacked and transformed a church into their personal toilet. This public restroom was once the St. Catherine Church in Moria, a small town on the island of Lesvos, which was flooded with migrants who arrived via Turkey,” the report said.

That report said, “As a deeply religious society, these attacks on churches are shocking to the Greek people and calls to question whether these illegal immigrants seeking a new life in Europe are willing to integrate and conform to the norms and values of their new countries.”

In fact, residents there no longer feel safe, the report said.

In another attack, “in 2016, the Church of All Saints in Kallithea near Athens was set aflame by ‘Arabic speakers’ — historically conscious Greeks see a continuum in the Islamic targeting of their churches.”

The pattern is a common one for Muslims moving into a nation, the report said.

“We should remember that Greece spent 400 years under Turkish Islamic rule and that the fight for freedom was bloody. With that in mind it is even more dramatic seeing these images of fighting age migrants desecrating Greek holy places and having no respect for the country they are allegedly seeking refuge in,” the Times continued.

Ibrahim explained it was in 1453 that Muslims attacked and destroyed “countless Greek churches, including Hagia Sophia.”

“‘Where there were bells, Suleiman broke them up and cast them into fires. Thus, in place of bells there were now muezzins.’ Cleansed of all Christian ‘filth,’ Gallipoli became, as a later Ottoman bey boasted, ‘the Muslim throat that gulps down every Christian nation—that chokes and destroys the Christians,'” the report quoted.

The attacks, Ibrahim wrote, are not just happening in Greece, either. “All around Western Europe, churches are under attack. This is especially true of the two countries home to Europe’s largest Muslim populations: Germany and France.”

In one region in Germany alone, 200 churches were vandalized, with crosses broken, the report said.

“Before Christmas, in the North Rhine-Westphalia region, where more than a million Muslim migrants reside, some 50 public statues of Jesus and other Christian figures were beheaded and crucifixes broken,” Ibrahim explained.

In France, an average of two Christian churches a day are vandalized.

Ibrahim noted one thing is clear: “Greece has become the latest exemplar of ‘Islam’s Rule of Numbers’ — a rule which posits that the more Muslims grow in numbers, the more practices intrinsic to Islam grow with them, in this instance, the desecration of Christian churches.”