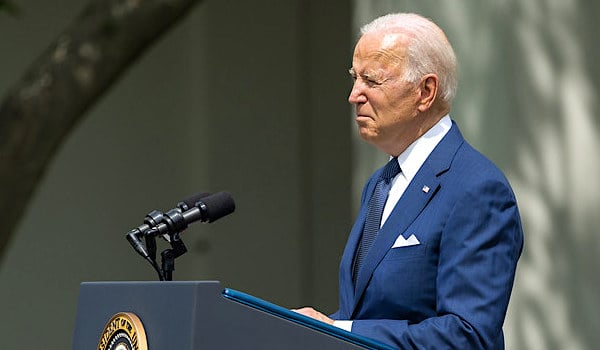 President Joe Biden delivers remarks on the 31st Anniversary of the Americans with Disabilities Act on Monday, July 26, 2021, in the Rose Garden of the White House. (Official White House photo by Adam Schultz)

By Daren Bakst
The Daily Signal

The Biden administration and its Environmental Protection Agency are continuing their attack on sound science and undermining faith in the regulatory process.

In December 2020, during the Trump administration, the EPA decided to retain the existing air quality standards for fine particulate matter. This decision was based in part on the advice of the Clean Air Scientific Advisory Committee.

At the time, the EPA explained, “The U.S. has some of the lowest fine particulate matter levels in the world—approximately five times below the global average, six times below Chinese levels, and 20% lower than France, Germany, and Great Britain.”

On his first day in office on Jan. 20, 2021, President Joe Biden issued an “Executive Order on Protecting Public Health and the Environment and Restoring Science to Tackle the Climate Crisis” that directed agencies to review past agency actions.

In a fact sheet accompanying the executive order, one of the actions to be reviewed was the EPA’s decision just one month earlier to retain the existing fine particulate matter standards.

Under the Clean Air Act, every five years, the EPA is supposed to review, and if appropriate, revise, the air quality standards for fine particulate matter.

But the Biden administration wants to intervene right away to make the standards even more stringent.

In March 2021, EPA Administrator Michael Regan dismissed all of the advisers from the Clean Air Scientific Advisory Committee as well as from another legally required panel, the Science Advisory Board.

This shocking move, made before the EPA’s decision in June 2021 to reconsider the fine particulate matter standards, gives the impression that the administrator only wants to only hear from those who will support Biden’s agenda.

John Graham, who had led the EPA’s Science Advisory Board before it was disbanded, stated after this purge, “Now, for the first time in the agency’s 50-year history, we have an administrator interested in scientific advice only from those scientists he has personally appointed.”

It will now be up to Regan to decide whether to make the standards more stringent. But this looks to be a foregone conclusion.

From deciding to revisit the fine particulate matter standards in the first place to purging the Clean Air Scientific Advisory Committee, the EPA and the Biden administration have been taking actions that reflect a complete disregard for science and the scientific process used by agencies.

Instead, these actions reflect a belief that science and the regulatory process are only worth respecting so long as they yield the desired political and ideological outcomes.

In 2009, President Barack Obama issued a memorandum on scientific integrity, arguing that the public must be able to trust the science and the scientific process used by agencies.

He was absolutely right. Unfortunately, the Biden administration’s actions have given the public every reason to not trust the science or the scientific process used in protecting the nation’s environment.

Legislators should not stand by and watch as this abuse unfolds. They should prohibit the EPA from revisiting the fine particulate matter standards at this time and take additional actions to ensure the use of sound science by the EPA.