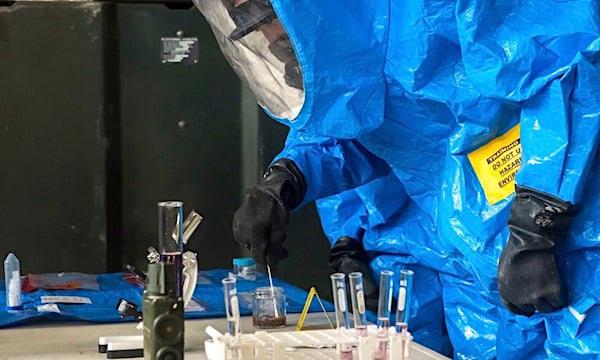 The United States continues to dismiss as “Russian propaganda” the claim that Ukraine is developing biological weapons.

However, the U.S. State Department’s top Ukraine official made a startling admission to a Senate committee in response to Republican Sen. Marco Rubio’s question, “Does Ukraine have chemical or biological weapons?”

Undersecretary of State Victoria Nuland did not deny or confirm that Ukraine has chemical or biological weapons. She apparently surprised the senator and the panel by acknowledging the European nation does have “biological research facilities” that are a source of concern amid the Russian invasion.

“Ukraine,” Nuland began, speaking slowly and deliberately, “has biological research facilities which, in fact, we are now quite concerned Russian troops, Russian forces may be seeking to gain control of,” said in response to a question from Republican Sen. Marco Rubio of Florida.

Nuland said “we are working with the Ukrainians on how they can prevent any of those research materials from falling into the hands of Russian forces should they approach.”

The State Department later described the labs as Soviet-era facilities that the U.S. has helped Ukraine convert to research of infectious diseases.

Ukraine handling ‘especially dangerous pathogens’
Meanwhile, the National Pulse reported Wednesday that it recovered a deleted web article showing Barack Obama helped secure an agreement when he was a U.S. senator that led to the construction of biolabs in Ukraine handling “especially dangerous pathogens.” A level-3 bio-safety lab opened in the Ukrainian city of Odessa in 2010.

A report one year later by the U.S. National Academy of Sciences’ Committee on Anticipating Biosecurity Challenges of the Global Expansion of High-Containment Biological Laboratories said the Odessa laboratory “is responsible for the identification of especially dangerous biological pathogens.”

“This laboratory was reconstructed and technically updated up to the BSL-3 level through a cooperative agreement between the United States Department of Defense and the Ministry of Health of Ukraine that started in 2005. The collaboration focuses on preventing the spread of technologies, pathogens, and knowledge that can be used in the development of biological weapons,” the report said.

Zakharova said Russia had evidence the Ukrainian health ministry ordered the destruction of samples of plague, cholera, anthrax and other pathogens before the Russian invasion began Feb. 24. She described it as “an emergency attempt to erase evidence of military biological programs” financed by the Pentagon.

Pentagon spokesman John Kirby reacted, calling the claim “laughable” and suggesting Moscow itself may be preparing to use a biological or chemical weapon.

“The Russian accusations are absurd, they are laughable and you know, in the words of my Irish Catholic grandfather, a bunch of malarkey. There’s nothing to it. It’s classic Russian propaganda,” Kirby said.

“It’s Russia that has a long and well-documented track record of using chemical weapons, including in attempted assassinations and poisoning of Putin’s political enemies like Alexey Navalny,” she wrote on Twitter.

The European Union on Wednesday said the credibility of Moscow’s claim is “very doubtful.”

The EU, he said, was not aware of any Ukrainian laboratories that violate international law.