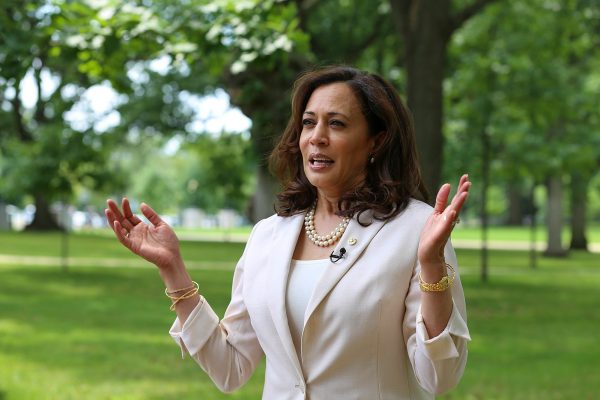 Kamala Harris is a perfect example.  On Thursday, the former press secretary for Ukrainian President Volodymyr Zelensky stated on Twitter that it would be “a tragedy” if Kamala Harris ever won the presidency…

Volodymyr Zelensky’s former press secretary tweeted then deleted a post on Thursday saying it would be a ‘tragedy’ if Vice President Kamala Harris were to one day be president after she laughed through questions at a press conference in Poland about the refugee crisis in Ukraine.

‘It would be a tragedy if this woman won the presidency,’ Iuliia Mendel, who served Zelensky’s administration from June 2019 until July 2021, wrote on Twitter before quickly deleting the post.

Of course Mendel was 100 percent correct.

Without a doubt, it would be a tremendous tragedy for all of us if Harris ever became president.

But the Ukrainians desperately want our help in this war, and so what would cause a key Ukrainian figure to make such a derogatory statement about Harris at such a critical time?

If you aren’t aware of it yet, here it is…

Mendel’s comments were in response to another tweet with a video showing Harris laughing when asked about the refugee crisis resulting from people displaced from Ukraine fleeing to neighboring countries and saying through giggles: ‘A friend in need is a friend indeed.’

What was she thinking?

Sometimes I wonder if she just blurts out whatever comes into her head.

If she actually becomes president someday, the magnifying glass on her will become even more intense.

What a scary thought.

During that same press conference, Harris pledged that the U.S. would defend “every inch” of NATO territory…

Vice President Kamala Harris vowed to defend ‘every inch’ of NATO territory Thursday as US troops fired Stinger missiles during military drills in Estonia and as Vladimir Putin’s moved within a few miles of Kyiv as their brutal invasion continued.

If she was given a blank map of the world, do you think that Harris could pick out all of the NATO countries?

I think that we all know the answer to that question.

I have no idea how someone like Harris becomes the vice-president of the United States.  I suppose that it is yet another very clear sign of how far we have fallen as a nation.

Of course she is far from alone.  U.S. Representative Maria Elvira Salazar has previously worked as a news anchor for CNN’s Spanish channel and Univision, but now she is suddenly a rising Republican star in the U.S. House of Representatives.

Max Blumenthal had the opportunity to ask Salazar if she would support a no-fly zone in Ukraine, and she emphatically replied that she would…

On March 9th, Rep. Salazar was approached by The Grayzone’s Max Blumenthal, where the journalist asked the congresswoman if she would “support a no-fly zone in Ukraine.”

Without hesitation, Rep. Salazar went on to proudly display her solidarity with the Ukrainians, saying, “I support everything that has to do with punishing Vladimir Putin and helping the Ukrainians.”

Most reporters would have probably stopped there, but Blumenthal followed up on his question, and Salazar was forced to admit that she doesn’t even know what a no-fly zone is…

When confronted with that rather critical element regarding no-fly zones, Rep. Salazar admitted she wasn’t aware that no-fly zone enforcement comes with the caveat of potential acts of warfare.

“I don’t know what it will mean, but you know, freedom is not free.”

She doesn’t know “what it will mean”?

I would expect that sort of an answer from a Democrat, but Republicans are supposed to be better than that.

Sadly, apparently they are not.

And if members of Congress do not understand what is at stake, what does that say about the general population?

Lastly, I want to talk about a very dangerous woman named Victoria Nuland.

Nuland currently serves as the Under Secretary of State for Political Affairs, but she has been in Washington for a very long time.  While serving on Dick Cheney’s staff, she played a key role in the invasion of Iraq, and in 2014 she was instrumental in helping to overthrow the democratically-elected government of Ukraine.

Nuland continues to play a key role in Ukraine policy to this day, and this week she had the opportunity to testify in front of a key Senate committee.  During that testimony, Senator Marco Rubio asked her a question about biological weapons…

I only have a minute left. Let me ask you, does Ukraine have chemical or biological weapons?

Nuland: Ukraine has biological research facilities, which, in fact, we are now quite concerned Russian forces may be seeking to gain control of. So we are working with the Ukrainians on how they can prevent any of those research materials from falling into the hands of Russian forces, should they approach.

Did she really just admit that?

And guess who has been funding those “biological research facilities”?

Tucker Carlson did a great segment on this, and if you haven’t seen it yet you can find it right here.  I will not repeat everything that Carlson and his team discovered, but I will say that it is beyond shocking.

We were told over and over again that the Biden administration knew that the Russians were going to invade Ukraine.

If that is the case, then why wasn’t anything done to secure those facilities?

Just imagine would could happen if one of those facilities gets shelled by accident and dangerous biological agents get released into the wild.

Who is going to clean that up?

And why does someone like Victoria Nuland still have a job?

After the Iraq War, she should have been banished from Washington in disgrace.

But instead she just kept getting promoted.

And after what she pulled in Ukraine in 2014, there is no way that she should have ever held a government job ever again.

Sadly, this is how “permanent Washington” works.  The rats just keep helping one another get to the top of the food chain.

Hopefully the American people are starting to figure out how the game works.  One promising sign is the fact that one recent poll found that a majority of the American people believe that Joe Biden is at least partially responsible for what has happened in Ukraine…

A HarrisX poll has revealed that most Americans see Joe Biden as a primary reason Russia decided to invade Ukraine.

The survey found that 58% of Americans believe Biden’s toothlessness has prompted Vladimir Putin to push ahead with the conflict.

A further 62% of Americans said they believe Putin would not have dared to take military action if President Trump had been reelected.

For the four years of the Trump administration, things were relatively stable in Ukraine.

But then Joe Biden and his all-star team of warmongers gained power, and now life has become a complete and utter nightmare for the Ukrainian people.  For example, just consider what conditions are like on the streets of Mariupol right now…

Bodies are piling up on the streets of Mariupol where starving Ukrainians have resorted to fighting each other for food in the desperate conditions in the besieged port city.

Residents have been sheltering for days without food, water and power in below freezing weather amid constant bombardment from Putin’s forces, which saw a maternity hospital shelled yesterday, killing three people including a six-year-old girl.

This is despite Russia’s foreign minister Sergei Lavrov claiming that all women and nurses were evacuated from the hospital and it was deliberately targeted because it had been taken over by Ukrainian radicals, dismissing the Western reaction as a ‘pathetic outcry’.

All of this could have been avoided.

But Biden, Harris, Nuland, Antony Blinken, Jake Sullivan and the other warmongers in the Biden administration wanted a showdown with Russia.

Now they have their wish, and the world will never be the same again.

We were warned that World War 3 was coming, and now it is here.

Joe Biden is not the right person to be in the White House during such a time as this, but we better be praying for his health.

Because if he is unable to continue, Kamala Harris will take the reins of power, and that truly would be a nightmare scenario.