‘They’re lying to you’: Putin heckled on live TV by Russian TV employee 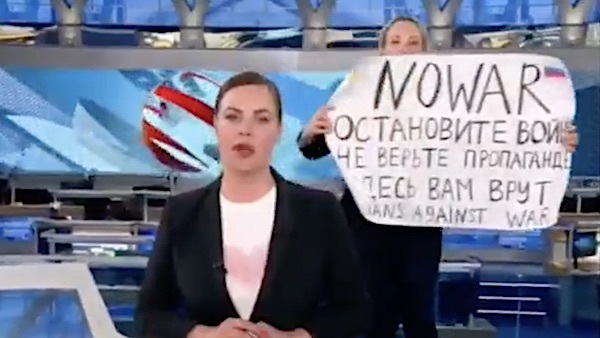 (SLAY NEWS) — An employee at Channel One Russia, the leading news network in the country, crashed a live television show to heckle Vladimir Putin and protest the war. She later released a taped message denouncing Putin and his war.

She ran on the screen with a sign reading ‘No war” and she yelled in Russian “No to war, stop the war.” The brave woman is Maria Ovsyanikova, an editor for the station. She was detained by police and can expect the worst after Russia passed new laws cracking down on dissent from the media.

Her sign in Russian said: “Stop the war! Don’t believe propaganda! They’re lying to you here.” And “Russians against war” written in English. The broadcast immediately cut away but not fast enough.

The post ‘They’re lying to you’: Putin heckled on live TV by Russian TV employee appeared first on WND.